Gianluca Costantini, activist and illustrator, guest at the Human Rights Festival, through his drawings narrated the encounters, people and films at the festival held in Milan from May 2nd to 7th, 2017. For the second consecutive year, the association Sole Luna – Un ponte tra le culture has been a partner of the Human Rights Festival in Milan with the selection of 19 documentaries in the DOC section and 3 films for the EDU section. The sketches of the 19 documentaries presented are set up in the aisle of the Church of Spasimo.

Gianluca Costantini (Ravenna, 1971) has exhibited in a number of museums and galleries abroad: the Lazarides Gallery, London (2009), the Salon du dessin contemporain, Carrousel du Louvre, Paris (2010), the Dox Centre for Contemporary Art, Prague, the Museum of Graphic Humor Diogenes Taborda, Buenos Aires (2014). In Italy, his drawings were exhibited alongside Alighiero Boetti’s works at the Museum of Contemporary Art in Lissone (2013), or made up large installations and themed projects, such as the D406 gallery in Modena and the Centro Arti Opificio Siri in Terni. As a graphic journalist, he gave a lecture at the Ars Electronic Center in Linz (2009) and took part in the Festival Human Rights in Lugano (2015).
With him, drawing can become a performative act, in a magical dialogue with different stories ad languages: it happened with Hanif Kureshi at the Teatro Alighieri in Ravenna (2011), and with Emidio Clementi, the singer and bass player with Massimo Volume in Modena.https://solelunadoc.org/festival-2017/palermo-2017/exhibitions/?lang=en 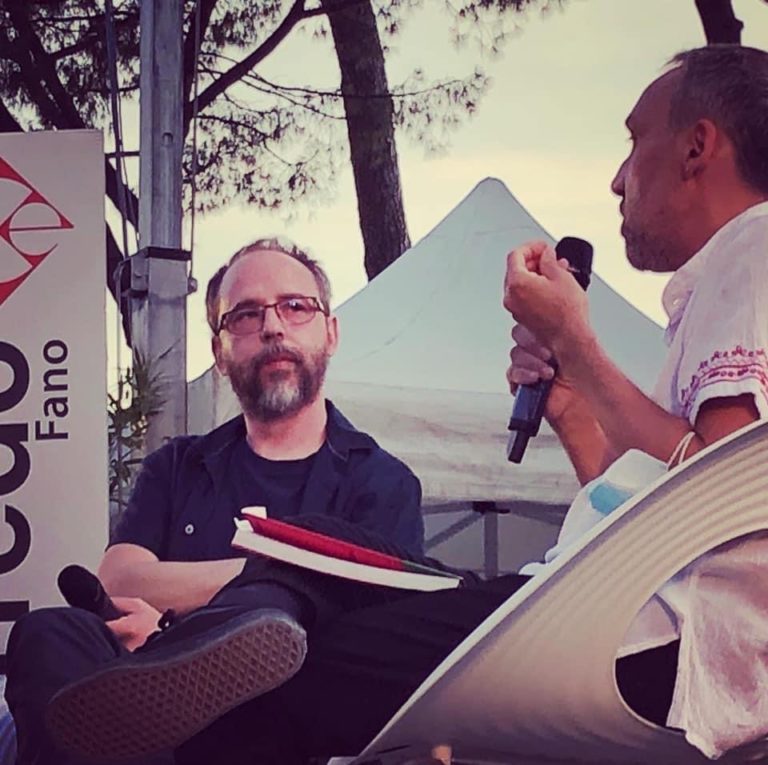